MEMS, an abbreviation of microelectromechanical systems, has become a keyword in the semiconductor industry. Simply put, MEMS is a type of microscopic device consisting of electronic circuits, sensors, and moving parts integrated on a single chip. MEMS technology has already been applied to such equipment as printer heads and projectors, and the market for MEMS is expected to grow significantly, especially in the field of healthcare. Telescope Magazine asked Professor Masayoshi Esashi at Tohoku University, who has pioneered MEMS research in Japan, about the potential of nanotechnology applied to medicine.

Interview and text by Tatsuya Yamaji; photos by MOTOKO

Telescope Magazine: You've been studying MEMS and its applications in diverse areas. What made you particularly interested in medical applications?

Masayoshi Esashi: When I joined a lab at Tohoku University in 1970 as an undergraduate, its research was focused on medical electronics. The professor at the lab was working with his colleagues at the Faculty of Medicine to build vacuum tube amplifiers for electroencephalography (EEG) and electrocardiography (ECG). Earlier in 1965, Mr. Minoru Ono at Hitachi successfully developed the first metal oxide semiconductor (MOS) transistor in Japan. (Note: MOS transistors are the most common type of transistor used in semiconductor devices today. They consume relatively small amounts of electricity and are tightly integrated.) After becoming a graduate student at the university, I built a semiconductor ion sensor using the MOS transistor that Hitachi developed. The transistor was several hundred micrometers in length. I coated nearly the entire length of the device with heat sensitive wax, leaving only a section of 50 micrometers or so exposed. When the device is dipped in an electrolytic solution, it can measure the electric potential and ion concentration in the solution. I managed to apply wax onto these transistor devices using a toothpick, to the amazement of my colleagues. Some of them called me Goldfinger for my dexterity. [laughing] That was, of course, a reference to the popular James Bond movie released just around that time. Later I made a comb-shaped sensor and attached it to the tip of a catheter (a hollow tube that can be inserted into a blood vessel, urethra, etc.). The device was adapted into commercial products in 1980 by Kuraray as the catheter-tip pH and CO2 sensors.

Until 1970 or so, electronics kept undergoing a transition from vacuum tubes to transistors, and then to integrated circuits (ICs). In Japan, many manufacturers began to build electronic calculators. Engineers at the time used to build electronic circuits from scratch, by putting transistors and other components together. With the introduction of ICs, however, those chips containing ready-made circuits became the basic building blocks of electronic devices.

Telescope Magazine: The term MEMS first appeared around 1987. Was there any major breakthrough at the time?

Masayoshi Esashi: Well, the technology itself has been constantly in development since the 1970s. In the early 1980s, stringent emission control was imposed on car manufacturers, necessitating the development of pressure sensors to fine-tune combustion inside automobile engines. Constant monitoring of atmospheric pressure was the key to optimizing the amount of fuel that goes into the engine. This technology for preventing incomplete combustion soon became commercially available.

In 1987, the term MEMS began to attract attention following an international conference held in Tokyo (Transducers '87). AT&T Bell Labs presented microgears at this conference, and demonstrated a working micromotor the following year.

In the 1990s, many automobiles came to be equipped with an airbag system, in which MEMS-based acceleration sensors were used to detect a collision. Today, acceleration sensors are also deployed in user interfaces for smartphones such as iPhone, and arrays of MEMS are commonly employed in printer heads and video projectors.

So, the MEMS technologies pioneered and perfected by the auto industry have come to be widely used in the IT sphere.

Telescope Magazine: How do MEMS applications in the medical field differ from those in other areas? 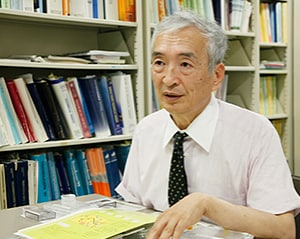 Masayoshi Esashi: It is important in medicine not to do harm to the patient's body, so the so-called minimally invasive procedures are preferred. That's where MEMS comes into play. To prevent infection, the devices have to be disposable, so reducing cost is a priority.

With the advancements in low-power, high-performance device technologies, many interesting MEMS applications have been introduced. An implantable eye pressure monitor developed at the University of Michigan is a good example. High eye pressure could cause glaucoma and even permanent vision loss. This eye pressure monitor helps to prevent such an outcome. The device is only one cubic millimeter or so in size, and contains a solar cell that is no larger than a grain of sand. It is designed to be implanted on the back of the eyelid to measure eye pressure. The device is equipped with a microprocessor that operates on 0.4 V and 90 nanowatts of electricity, and can store three days' worth of eye pressure data that can be wirelessly accessed from an external reader device.

Similarly, research into implantable sensors is being conducted worldwide. In one example, about 1,000 electrodes were implanted in the brain to monitor its pulse. The pulse acquired from each electrode was wirelessly transmitted as data packets, enabling to record which electrode issued a pulse at what time.

We attempted to develop a tactile sensor network system at our lab about 20 years ago, but the data processing power at the time was very limited and the system never attained the level of practical utility we had hoped for. Now, we are working with Toyota Motor Corporation to develop a new tactile sensor network system. This time we are designing an extremely complex system-an Internet-like network of sensors within a body [of a car or a robot]. Rather than using a central processor to constantly monitor all sensors, the system relies on a cloud of sensors that autonomously send tactile data to the computer on contact. Its potential applications would include nursing care robots. With tactile capabilities, the robots can moderate their motion so they do not harm the patients they come in contact with.

In the field of medical devices, we are also developing active catheters.