Telescope Magazine: Are clinical trials a tough hurdle to overcome?

Masayoshi Esashi: There may be some problems with the existing approval system administered by the Ministry of Health, Labour and Welfare, and there may be risk management issues on the part of Japanese businesses. Even if a promising medical device has been approved, these companies might not risk marketing it for fear of potential incidents.

The Kuraray catheter-tip pH and CO2 sensors I mentioned earlier is a case in point. The product took nine years to develop after we began the research in 1971. The product line included a number of variations for different parts of the body, including those for muscle tissues, the esophagus and stomach, and the oral cavity; but those for blood vessels turned out to be much less in demand than others. 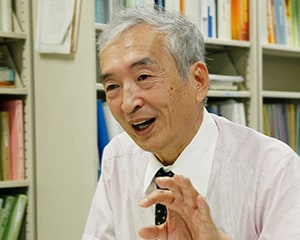 In a human body, oxygen absorbed in the lungs enters the bloodstream to circulate throughout the body, and is turned into CO2 by chemical reaction to be exhaled from the lungs. It is desirable to be able to monitor how well this cycle is working in a patient. In that respect, our catheter-tip sensor is advantageous because the sensor stays in the bloodstream and there is no need to draw blood for testing. There is one setback, however: once inside a blood vessel, the sensor cannot be calibrated anymore, and it becomes difficult to ascertain if the sensor is functioning properly or not. This could lead to unforeseen errors and accidents, and hospitals were reluctant to take that risk. As a result, they chose to do tests in a conventional way by drawing blood from patients. We became aware of this issue and responded by building a blood analyzer with a sensor attached to the chamber at the root of the catheter needle, but in the end the machine was not commercialized. In medicine, mistake-proofing and cost effectiveness are of paramount importance.

The same caution also applies to diabetes-related devices. Diabetics need to periodically draw blood and self-inject insulin (a hormone that lowers the blood sugar level) for an amount commensurate with the blood sugar reading. An automated insulin injection machine would be ideal, but should it inject a higher dose even once, the consequence could be fatal. As long as diabetics inject insulin by themselves, in contrast, they have no one but themselves to blame should an accident occur. That is why few people attempt to build automatic insulin injection machines, even if self-injection by patients is prone to accidents. Development of medical devices inevitably goes along the path with the least problems.

In that sense, the wireless immunosensor device developed by Tomohiro Ishikawa is very promising. Ishikawa, who now works at my lab, developed this device while he was at the University of California, Berkeley as an employee of a Japanese corporation. The device consists of an IC chip and an array of magnetic sensors formed on top of it. Each sensor is attached with an antibody (a protein produced by the immune system to protect the human body from antigens such as invading bacteria). When the IC chip is dipped in blood, antigens found in the blood combines with the antibodies attached to sensors. Now, the antigens caught on the sensor can still combine with other antibodies. So, when additional antibodies artificially attached with magnetic beads are sprinkled onto the sensor array, they also combine with the existing antigens (which have already been paired with antibodies on the sensor), with the effect that the antigens are flagged with magnetic beads. All you have to do now is to use the magnetic sensor readings to identify the antigens. The chip is wirelessly powered, and the sensor readings are wirelessly transmitted to be passed on to the hospital. Depending on the assay results, the hospital may perform further tests and quickly reach a diagnosis. The IC chip has to be disposable, but if demand is large enough the cost could come down through the economy of scale.

Telescope Magazine: How does R&D in Europe compare with that in Japan?

Masayoshi Esashi: In Europe, universities and national laboratories tend to work together on research, not only in medicine but also in other fields. Germany's Fraunhofer-Gesellschaft (an organization consisting of 56 research institutes throughout Germany) readily comes to mind. Similar establishments are being formed in Finland, and more recently in France, too.

In contrast, Japanese R&D establishments are in silos. For instance, universities are under the purview of the Ministry of Education, Culture, Sports, Science and Technology (MEXT), whereas the National Institute of Advanced Industrial Science and Technology (AIST) is controlled by the Ministry of Economy, Trade and Industry. Impressive facilities in large institutions are often underused due to the lack of personnel. Mismatch of resources like this could keep Japan's R&D efforts permanently fragmented.

Turning pioneering research into products requires the cycle of manufacturing and evaluation to ascertain practical value. In Japan, the efforts in this area seem to be rather haphazard. In fact, this tendency seems to be common to many Asian countries, except perhaps Singapore. Countries like Japan, Korea, and Taiwan share the history of trying hard just to catch up with technologies developed overseas. In this respect, Europeans seem to have established a solid system of integrating research with commercialization. Perhaps that's why European researchers can enjoy such long vacations without losing competitiveness.