Tokyo Electron Limited (TEL) announced that it has won the Award for Excellence in the semiconductor manufacturing equipment category at the Semiconductor of the Year 2015, for the company's EXIM™ sputtering system for next-generation semiconductor devices.

Now in its 21st round, the Semiconductor of the Year is an annual award program sponsored by the Electronic Device Industry News, a publication of Sangyo Times, Inc. Reporters from the Electronic Device Industry News vote on candidate products and technologies to select winners for each category, based on such criteria as innovativeness of development concept, readiness of mass production infrastructures, impact on society, and future potential.

The EXIM sputtering system incorporates advancements in the magnetic tunnel junction (MTJ) thin film deposition technology which is considered to be crucial to the development of the much talked about next-generation STT-MRAM memory elements. Also, the system features a TMR (Tunneling magnetoresistance) ratio* as high as 230%, as well as the unique and flexible modular design that allows the system to be freely reconfigured for various purposes ranging from development to mass production. These features were highly appreciated by the jury, leading the EXIM to win the Award of Excellence out of 38 nominees in the semiconductor manufacturing equipment category.

"We are truly honored that the EXIM was given the Award for Excellence at the Semiconductor of the Year 2015 in the semiconductor manufacturing equipment category," said Takeshi Okubo, Executive Officer and General Manager, SDBU at TEL. "The EXIM has already entered the production phase and we have been taking orders. Customers who have installed the EXIM at their sites for mass production or development purposes speak highly of the system's new MTJ film deposition technology, as well as its superior productivity and flexibility. Working side by side with our customers, TEL will continue to pursue technological innovations and make significant contributions to the semiconductor device industry."

*TMR ratio is the ratio of the resistance change that occurs when the magnetization directions between free and reference layer switch from parallel state to anti-parallel state, and vice versa. Higher MR ratio is essential for manufacturing of large capacity memory devices. 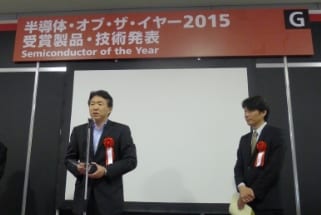