Single Wafer Cleaning System, CELLESTA™ -i MD Wins the Grand Prize at Semiconductor of the Year 2014

Tokyo Electron Limited (TEL) today announced that it has won the Grand Prize in the semiconductor manufacturing equipment category at this year's Semiconductor of the Year Awards, for the company's CELLESTA™ -i MD single wafer cleaning system.

As semiconductor devices become smaller, avoiding pattern collapse of high aspect ratio structures during the post clean drying process is a serious challenge. In place of the existing IPA* drying method, the CELLESTA -i MD uses a new drying technology called Monolayer Dry. This method successfully reduces the incidence of collapse of circuit patterns to less than one-tenth of those observed using conventional methods.

This award recognizes the ingenuity and future potential of the CELLESTA -i MD, and its continued growth in market share. It was chosen from 34 products and technologies nominated for the Grand Prize in the semiconductor manufacturing equipment category.

"We are honored to have received the Grand Prize in the Semiconductor of the Year's semiconductor manufacturing equipment category for the CELLESTA -i MD. TEL will continue to strive for technological innovation with its customers, and offer the best solutions," commented Toshiki Kawai, Executive Officer, General Manager, SPSBU, TEL. 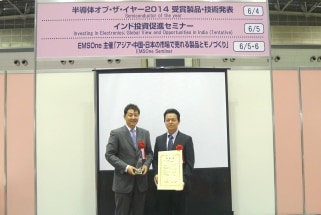